Italy; one of the classic romantic languages, land of addictive cuisine, steeped in history and lavish architecture and home to a great many Prog bands over the years. A country that has seen so many different faces grace it’s political halls over the centuries, armies that have conquered lands far and wide and nowadays they continue to conquer the minds of listeners through their unique brand of Prog rock. From Pisa, Italy comes Eveline’s Dust with their second album, The Painkeeper.

Intrigued by the album cover that has quite a few facets to it, including; Native culture with the dream catcher on a stick, The cartoonish mummified wrapped forearms, and the soft feel of iconic comic strip look to the whole image al la Calvin and Hobbes et al. The cover invokes the obscured and the magical not to mention the interesting font they chose that to me does and doesn’t go with the album art which I admire. The floating/flying night time masked Seer who is The Painkeeper allows you to sleep at night and takes your pain away till the dawn creates an inquisitive cover that you can’t help but want to peer in to the musical world that is Eveline’s Dust. Nine tracks that range a variety of multiple influences bringing us another great Italian Prog offering. 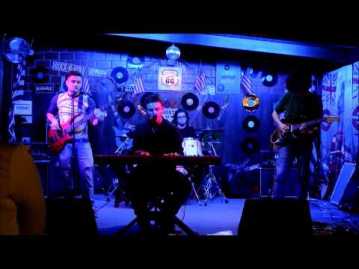 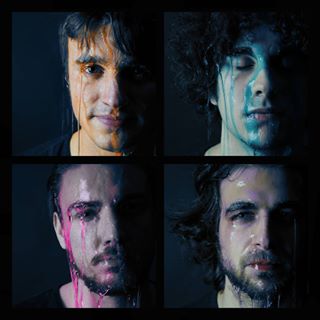 Awake opens up the record in a minute and a half introduction to what lies ahead. A stout and grand opening to an album that really does what the title says, it definitely awakes you right out of the gates with a prominent Emerson, Lake & Palmer feel to it. Straight forward and smooth sailing with some great guitar tones amidst some bright and brazen  keyboards passages accompanied by tight drumming patterns. Prog rock right from the first notes in this splendid first track. The Painkeeper follows up next in classic Prog tradition with the album’s title track in the second slot. Also in keeping with the recipe of a lot of European bands, they sing in English to garner the attention of audiences outside of their own country’s borders. Coming in at 8:12minutes it draws upon the slow Steven Wilson style of sounds a la The Raven that Refused to Sing but also a hat tip to the 70’s catchy piano tones and drum rolls slowly across the snare. Slow pulls on guitar chords sing along with the vocals that are gentle and melodic as they sweep across the musical overtones here and make way for a firey guitar solo that lifts the song up through the clouds but only for a moment before it strains itself and fades away in to the stratosphere disappearing and the dust falls back down to earth to a finger picking guitar interlude. This track calls upon the darker chord structures in its second half bringing through a different feel to the track as the song has shifted through a few subtle but significant tempo/timbre changes. It stays with this tone for the duration of the song closing out in a darken haze that leaves you feeling unsettled in your seat. Fitting and a very unique design to the track as if a two-parts were amalgamated in to one track to create that Jekyll and Hyde motif to it. Nrem opens with a very wonderful vocal harmony passage that is psychedelic in the sense of repetition but a great start to a joining beautifully sounding track of clean guitars, bright drum patterns and angelic synths combined with a surprising clarinet(or alto sax) solo that cuts through eloquently in a very Paul Desmond jazz kind of way. A vintage 70’s sounding instrumental aside from the beginning that is a gentle follow up to the title track and epilogues it quite nicely.

Clouds rips right in to it with a hard knock Progger track that utilizes the tempo/timbre shifts very well. The distorted guitars are discordant as are the synths as they roll over the tight drum patterns that are almost robotic sounding because of their snap and tight form here struck with precision. The guitar solo falls from the sky and comes in like a whirlwind and takes over before the song drops back in to a gentle shuffle to bring forward the vocals. Compassionate and genial vocals fill the song out where the first part was a barrage of taut musicianship shifting gears to bring forth the voice that carries it through to the next section of intense instrumentation. The last section is a very Gentle Giant meets Porcupine Tree feel to it where the song again changes up the tempo/timbre gears with a pulsing finish to the track solidifying it as a wonderful example of Neo-Prog. Joseph starts off with some great mildly flange guitar sounds as the drummer accents with a cymbal roll and the acoustics and vocals follow suit and gracefully enter the song in a folky Prog sounding track that draws your memory to some early Jefferson Airplane and Jethro Tull songs. It flows through in a beautiful waltzing pattern as the song spins around your head and illuminates the sounds coming out of your speakers then we shift gears in a sudden change and the song goes full on Prog assault and snaps in to a driving tour de force halfway through. A searing guitar solo takes us on to a stop/start transition in to a piano passage that has a very film noir feel to it as the song changes up the tempo/timbre again to a dark and foreboding passage of almost sci-fi thriller proportions. We then jump back to our tour de force onslaught of Prog-tacular sound and back to the waltzing passage from earlier as the vocals come back to us and carry us to the end. Brilliantly crafted song with so many of the main Prog ingredients in place and well executed in 8minutes.

A Tender Spark of Unknown gives us a snappy bassline before it launches in to a free form jazz punch a la Gentle Giant style with some Esbjorn Svensson Trio inflections to it. Fitting title to a bouncy track that has you bopping your head and body all around it. The tempo/timbre and start/stops in it are explosive and fun, the vocal harmonies are done with mechanical precision and the gentle midway passage piano riff is soothing as it is striking. So much accomplished in under the 5minute mark here and a very prominent track on the album. The band’s influences are very evident throughout the album but they don’t dictate their sound or style rather they have incorporated who they like and admire in to a blender full of their own concoction. This is how I picture a clock’s internal cogs functioning in something Salvador Dali made. Vulnerable does exactly that and shows the band’s softer side and a duet with a female voice bringing a very blended and creamy texture to the song. The song’s humble beginnings take on a somewhat Rick Wright memorial tone to it before the vocals start out then it moulds in to a soft flowing water current before the halfway point where it then jumps gears and goes in to a more complex set of riffs for an interlude then pulls back to a wine glass tinkling synth set of notes to close it out. Simplicity said best and this track does it with grace and finesse throughout.

HCKT gets right to it with some great guitar work that has you wondering where on the fretboard he’s doing this as the drums start to drizzle in along with the bass and synths adding in spice to come at the right time. Then we’re smacked with a barrage of sound and the band’s big wall of tones gets right in our face followed by the bass getting dirty and funky as the guitar and vocals track each other down a gravel road with an equally dirty tone to it as the band strikes notes with strife and their start/stops are magickal here and stunning nonetheless. The song goes right in to a fade out around the halfway point it sounds like but instead it commences phase two of the song and falls with great ease and poise to a ballad like trance sound as it pulls back on the intensity and takes us on a placid journey for a while before the piano alerts us of the changes pending as the song shifts yet again in a classic Prog fashion to begin the song’s landing in a slow build up that draws upon the drag of the notes to signal the coming end. Like the final curtain call of the orchestra playing out to a stage play the song has a very dramatic finish to it that tops it off eloquently.

We Won’t Regret the last song on the album and not even the longest, the band followed the Prog recipe nicely by putting the longest track earlier on. An animated track that starts off with some splendid acoustic guitar and a troubadour vocal that segues the rest of the band in shortly thereafter. Reminiscent of Steven Wilson meets The Alan Parsons Project for me in spots this track has a great 70’s feel to it as well with a stocked fusillade sound complete with a classic soaring guitar solo in the middle. It’s clean and compressed with all the trimmings making it a perfect instrument vocal on the song’s presence. The vocals have a wonderful theme song sound to them as they are rich and evenly candied as they take command of the song’s need for a profound vocal track. A strong finish to an amazing Prog album as they close out with a passive finish of piano notes to say goodnight. If their first album is anything like this one I can not wait to get a hold of it because this band has such great potential ahead of them and they will hopefully continue to create albums like this and stretch their boundaries beyond their visible envelope because they will certainly garner much attention from it and have a big fan here in Canada already for it!

Eveline’s Dust sophomore album is a shining example of what today’s Neo-Prog is all about, much like their colleagues in the Netherlands, Norway, Germany Finland, Scotland, et al they have brought old styles and sounds and rearranged them to be in the foreground once again but with their own unique branding of Prog as to not sound like or imitate anyone else. Italy has always been a country that has had some old school Proggers venture in to their lands in the highlight of the Prog era; Genesis, Yes, Gentle Giant and of course one of the most notable moments of Prog bands in Italy, Pink Floyd’s Pompeii anti-Woodstock concert film in 1971. As well as being the country that gave us bands like: Armonite, Le Orme, Maxophone, Goblin, Opus Avantra, Il Balletto di Bronzo and many others along with Eveline’s Dust to add to the list of greats. Enjoy