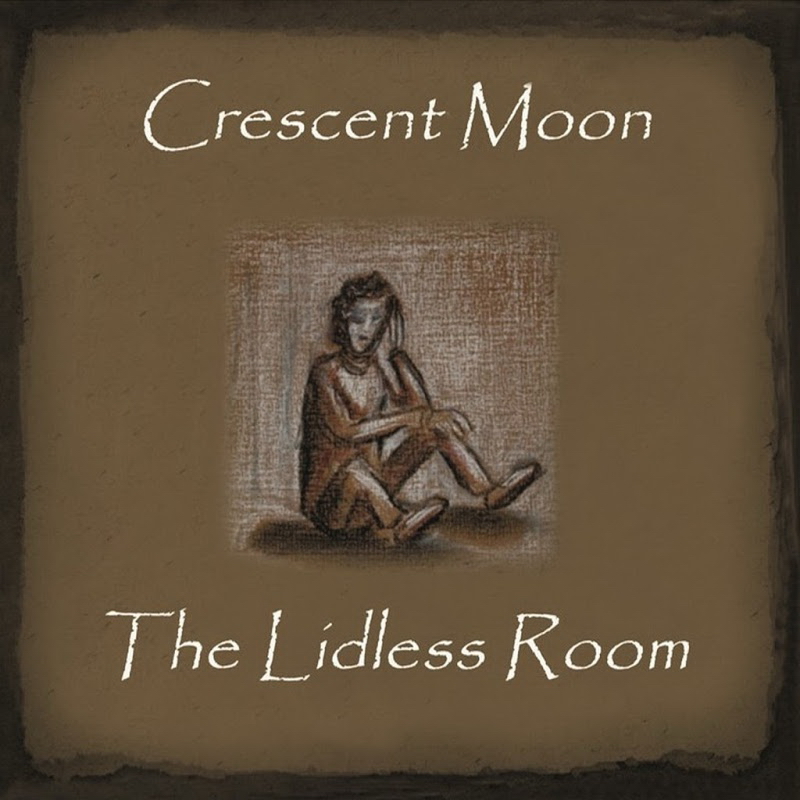 The Netherlands is home to many great bands over the last few decades and they just keep creating and producing some amazing sounds in an assortment of genres to appease anyone’s ears and for our requests of more Prog we have been sent, Crescent Moon from the small village of Babberich with their debut record, The Lidless Room. The band chose their name out of a list of other suggestions and felt they had their ideal name as it best suited their unique sounds and that it was symbolic with what they were doing musically. The band gives credit and thanks to poet, Sylvia Plath for the album’s conceptual title and we find many themes held within its songs therein from friends who grew up together and finally made the next step and made music together in this premiere record.

Eleven Tracks that cover some unique sounds and their own spin on the Prog genre, their album art in the coffee brown stained look gives you a sense of wonder and curiosity as its simple effect leaves you guessing and wanting to peer in to the album and begin your listening journey so wasting no time let’s begin that shall we? “Acceptatio” commences the album with the automated voice talking and some wonderful synthscapes filling the air from your speakers with some added in female choral vocals bringing a sense of calm harmony to the piece as it pulls off the dirge like entrance to the album leading us in to the next track. “G.A.B.O.S“(Game Ain’t Based On Sympathy) rolls in with some funktified grooves and a toe tapping beat that has that 80’s underground feel to it as the band already has the tempo/timbre changes down well and swaying to and fro throughout the track. A straightforward synth based track but not without some dully added twangy guitar at the end giving it a short, tight romp out of the gates musically and a mood and scene set for the rest of the record.”Black Vinyl Dreams” has the reminiscence of King Crimson’s 1969’s first Lp track “Epitaph” and some elements of Pink Floyd’s 1994 “Division Bell” album rolled in to one and presented here in a stunning track. The staunch musicianship is in clear view and the band showcases their vocal diversity with some blended female vocals in the background to add spice and flare to the track. The synths are stringent and carry the song through as they cut the air like a hot knife through butter. The drums are rugged as is the bass lines providing a hammer fall to the track and the guitar work is regal and careful consideration is played here through the solo as every note is pulled off the fretboard with precision and concludes the song with windswept gleam. “G.A.B.O.S. reprise” follows up next with a reprisal necessary to continue the stream of theme here if only for abut a minute to get that final word in. “The Bellman” has a slightly vaudeville and Beatles-esque feel to it a la Sgt Pepper’s in spots and almost horror film context to it regaling a story about the said Bellman. A short little number that three quarters of the way through shifts gears and brings in this sombre piano section to close out the song that is haunting and sweetened by the synths in the background with their subtle and quiet demeanour.

“Of Aphids and Ants” is a gear shifting tempo/timbre, start/stop changes in the song that questions life, reality and being just on this world as they give us a gentle shuffle beat through this track. Using the schematics of ants and aphids in correlation to humans here is a wonderful example of how we are all just something else in the eyes of someone else. The song glides through with calm care and keeping the instrumental aspect of the song simple and straight forward with some cordial piano movements and some very intertwined drum patterns in the beginning. The backing vocals are choral and harmonious that accentuate the piano lines that glide over the bass guitar who keeps it tight in the pocket with the drummer. “The Lidless Room” title track falls in the classic middle of the record slot and has that striking 80’s synth Emerson, Lake and Palmer sound to it bringing a brightness to the song’s overall tone and the upbeat drumming with almost reggae style guitar work jives and grooves its way on and through. The vocals are bouncy and keep with the brightness of the tune and has your feet tapping along as you absorb its message thoroughly. A dismal look at the internet and its ease of information that’s not always a good thing yet people willingly shove their personal data up there still making it part of the webbing that becomes the net. “Obsolete Men” is a great sleepy walk through track that has that dream weaving feel to it as the instruments are all tugging at your eyes to close and fall asleep to imagine other places you’ve never been to. The minor guitar chords have you swaying along and the piano notes are alluring and enticing you to sleep. One thinks of Pink Floyd’s 1969 soundtrack to “More” with this track as it has that Ibiza feel to it, islands, water flowing and waves coming up and returning away to the ocean in this lullaby fashioned song. “The Devil and the Machine” brings out the rocker in the band as they continue on with their journey here as the voice tells us about telekinesis as the band grinds down in to this one. The guitars are down and dirty for this one as the drums snap and curl around the kit with a snarl with the low end bass lines that sling up through the mud. The bull horn sound on some of the vocals adds that jeering effect making you uncomfortable in your chair. The synth solo is clinical and rusty mechanical sounding as it scoffs at us through electrical notes. A dirty track that has some rough characteristics to it giving the album some great diversity in sounds.

“The Old Riverbed” brings us to the opening birdsong and acoustic guitars that are overlapped with a dried out guitar fuzz few notes that are welcoming and scratchy as they come in and out with attitude. We’re taken to a old western town feel here as the song struts on through and casually strolls the sandy streets and dusty boardwalks where you steps are scuffed by the dirt on your boots. The walking bass line is a stout presence here as it speaks without words and stakes its claim in the song while the rest of the band struts and gloats that they own this town by the old riverbed. A great addition to the record taking you on a tangent from the other styles the previous songs gave us. “Through The Gate” is the final track on the album and has a brisk piano entrance to it along with some synth flybys and singled out bass notes to create an environment of closure and standing tall. The added horn brings an Empirical feeling to the track as something regal and brilliant then we are graced with the rest of the band falling from the skies in to place and rushing the waves up to your ears. The beautiful piece of music is a wonderful finale to the album and has Prog written all over it in just four minutes and you are begging your speakers to keep it going as this piece could have easily stretched the 10minute+ mark if it wanted to but the band felt that they said all they wanted to in those four minutes and perfectly done to finish off our journey int o this debut album from Crescent Moon.

This band from the Netherlands has just added themselves to the list of other great bands that emerged from their homeland and exported themselves globally with pride and a great record. With the stage now set for them we wish them all the best and hope to see more great music from them in the near future and the band hitting the road if not locally then via through a few different countries on a bill with other new bands to showcase their sounds which are a great addition to the genre! Enjoy.