“Tangerine Dream“, the name is synonymous with space itself and generally the first name one thinks of when electronic music is mentioned aside from Kraftwerk. Formed in Berlin in 1967 at the height of the psychedelic movement by Edgar Froese(whom we lost in 2015)  along with Chris Franke and Peter Baumann became “The Ones” two years earlier and played a few private gigs including the house of Salvador Dali (Now how cool is that right?!) The band shortly thereafter changed their name to Tangerine Dream and has kept the moniker since ’67. In ’69 the band released, “Electronic Meditation” with assistance from Klaus Schulze and Conrad Schnitzler beginning their first steps towards the Frankenstein movement of electronic music and by 1971 their album “Alpha Centauri” had blown the gates wide open to the new wave of Synthscape music and extremely lengthy passages in to the nether reaches of space. Unlike Kraftwerk who played halls and stadiums and various other venues, TD reached out to places lesser known for their rock orientated atmospheres and concentrated on old cathedrals and ancient ruins, open air events and outdoor amphitheatres from centuries ago that would help permeate the ambiance of what they were doing and allow people to stretch their imaginations and blending in the vibe of the surrounding areas as well as the music involved. There are literally dozens of shows out there now thanks to the band releasing in remastered quality these performances to the public that were only available through bootleg trading circles for decades, the latest installment is the Palais des Congres in Paris March 1978 show.

“The Tangerine Tree Series“(discontinued Oct ’06 due to legal reasons), a project under taken by the band has provided us with a series of shows from the 70’s onward and in high quality as well making it a real treat to listen to and giving us the experience of what it must have been like to have been there. Lava lamps and incense you will want to fill your room with as your headspace will be full of electronic sounds of wall-to-wall synth world projections. The show we are looking at today is live at “City Hall in Newcastle, England UK October 25th 1981″ where many bands over the years have graced its presence with their performances. Having never been there I’m not sure what the inside looks like but, hey, why think when you can Google right? It’s the sound we are going for here and what a show it is! Available as part of the Tangerine Tree series of shows known as Vol. 10 this show has always stuck out in my mind as one of their better performances prior to them incorporating more accessorized instrumentation rather than the full on synth attack of the senses that we find here and in previous years. 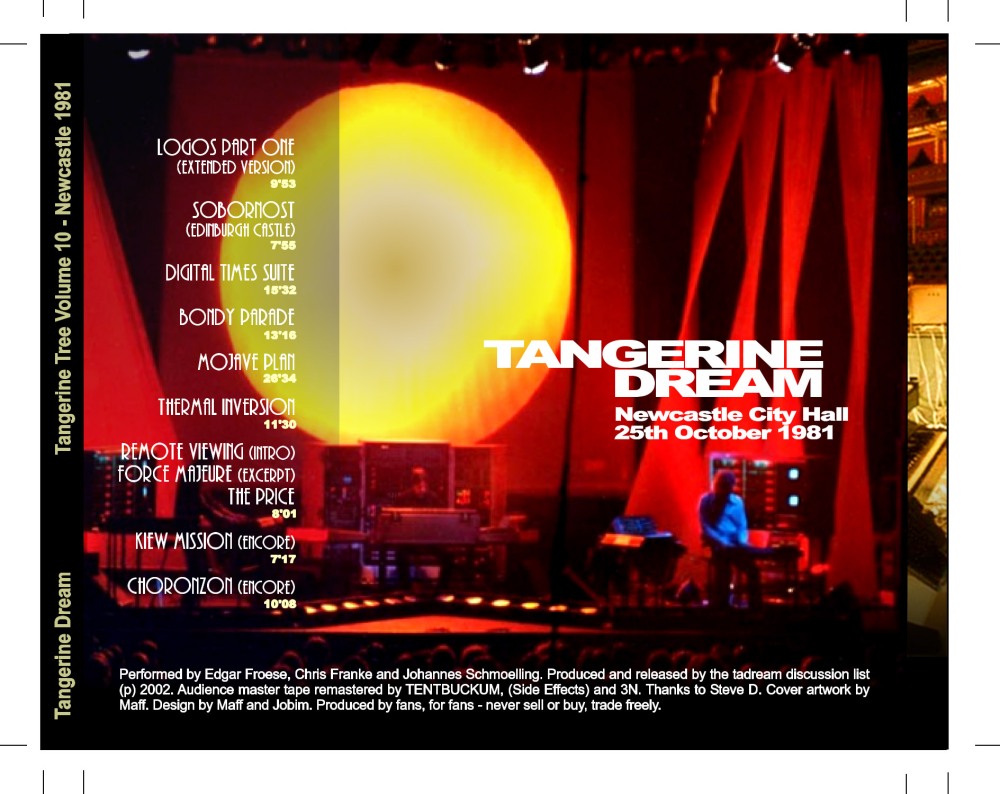 Originally you could get a 78minute version of this show that just fit on to one disc and you would loop your player so it started all over again for you because you weren’t ready to finish your trip in to outer left space. The band explored many different facets of Prog’s synth avenues and became a household name when speaking of keyboards and synthesizers in local music shops and at gigs both large and small. They also conducted and wrote music for several movie soundtracks; Legend, Thief, Risky Business, Firestarter, L’Affaire Wallraff and many others as their music was ambient enough to support movie soundtracks and filling enough to create any type of scene necessary. This show could easily have been a film score either in part or whole. For the purpose of the Tangerine Tree the band has separated songs in to individual tracks for the purpose of CD convenience and usage as opposed to making you listen to the whole thing if only one passage is all you wanted to hear or use for whatever it may be. The band almost never had vocalists in the 70’s with the exception of my favourite album, 1978’s “Cyclone” where Steve Jolliffe provided a almost robotic synth’d out voice adding more depth to the record. Later albums such as “Tyger” would include vocals and their current performances also have people singing in various songs which I feel takes away form the true essence of the band’s nature, sure one must “Progress” but at the same time one must hold true to one’s values of old and maintain a sound basis and structure to one’s craft. Perhaps it’s my fault I’m not in to their newer material and feel that it has truly lost something along the way. But this show is a mind expansion pack signed, sealed and delivered on your stereo system. Best played through a surround sound system if you have such a set up for an amazing 5.1 experience, if not and you’re like me you crank up your old “candle” speakers (remember those?!) and have at it.

There’s a helluva lot to say about a band who is strictly all synths at this point in their career as it’s three guys behind massive amounts of wires and ivory notes in front of them looping four notes or more, playing the leads and setting up the next phase to which I know for a fact I could not do if faced with this! But the band does go through many of Prog’s necessary elements of start/stops and tempo/timbre changes throughout the entire performance making it a Synthscape dream of sound and a laser light show to accompany it making a full scale sight AND sound experience. The bootleg version is slightly different and could very well be from a different show and mislabelled as City Hall in ’81 who knows but it is very similar for most of it, this one is obviously THE complete performance and cleaned up for master sound quality. The band has certainly come full circle in their journey through the Krautrock and Prog scenes as well as the film soundtrack scores to add to their credentials making them very well rounded and a creative force over the last 5 decades now.

This show I will present in its entirety to you so you get the whole vibe of the music to experience instead of my usual exploration of the songs individually and because those of you who read the last blog which was more of a small novel on The Pink Floyd, sorry for that folks! I thought I would spare you some eyesight and let you feed your heads with with dreamy synthscapes and lose your imagination in the electronic world of Tangerine Dream. Enjoy