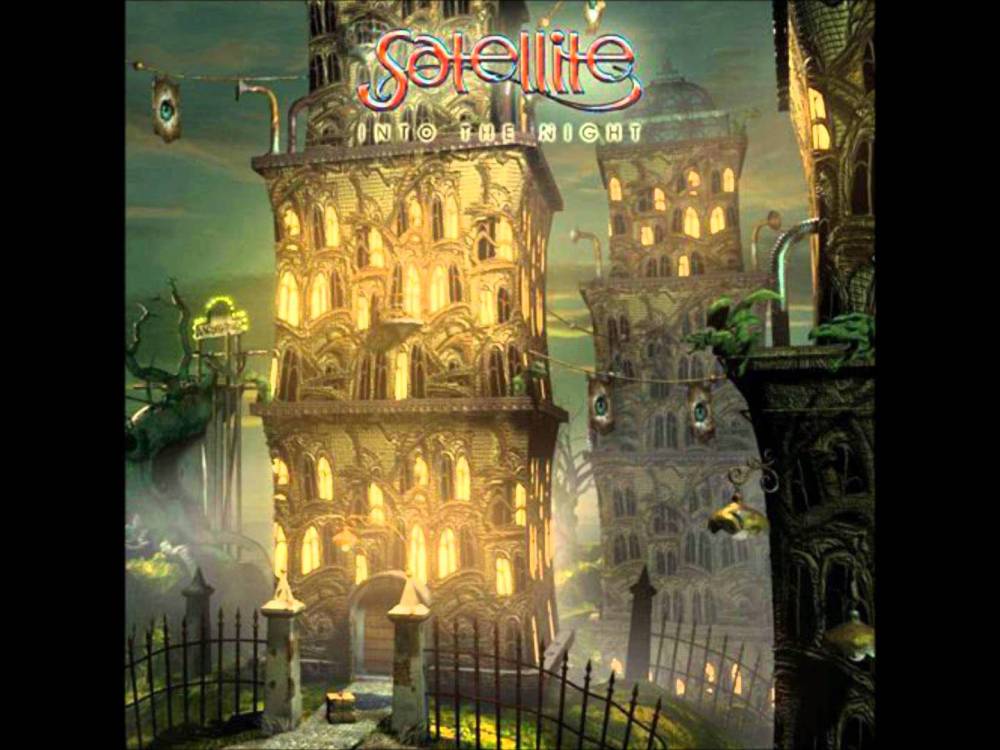 From what looks like a Tim Burton drawing for one of his animated movies the music in this album is nothing like anything Burton creates although, that said this band would do one of his films well for a soundtrack. Satellite from the Eastern European theatre of Poland, a Warsaw pact country and former communist land now opened up to the world of democracy and all its good and evil facets thereof. At a time when music was most likely smuggled in to the country via the black market the members of Satellite were head deep in to music that was either banned or really expensive to buy. Probably not as strict as some of the other surrounding countries were but more likely some restrictions were placed on the country by the Russian ruling government. Having spoken to some people I know who lived in Poland in the late 70’/early 80’s it was 50/50 on whether you could get things and then what to get was often a difficult choice to make when it came to music because you knew very little of it because none of the big Prog bands played Poland in the 60’s or 70’s not until the fall of the iron curtain did bands begin to show up for performances to blow the minds of kids who had little to no idea what they were hearing just that it was technically if not completely western and they loved it.

Formed by drummer Wojtek Szadkowski in 2000 as the band “Collage” it would be three years later before the first Satellite Lp would be released but initially as a side project of Wojtek’s but it began to build a foundation and take on a life of it’s own more and more causing Collage to fold and Satellite took the forefront of the operation. There has been a number of great Prog bands from Poland over the years, read the blog about Newspaperflyhunting earlier on in the archives of “Progressivelyso” to learn more about Poland’s contributions to the Prog world. Their music is slightly harder edged with a hard rock/metal sense to it but they do have softer tones to compliment and offset the balance between heavy and light, a good Prog Metal element. Lyrics in English which follows the German ingredient for attracting western audiences, Traumhaus being an exception. Speaking of singing in English, this band does it extremely well, better than a lot of bands who’s native tongue is English I must say. Very pronounced and direct, similar to Nice Beaver’s singer Erik Groeneweg.

“Into The Night” from 2007 was the first album I heard by the band and was immediately taken by their sound. Well produced and engineered, clarity and distinction was well put in to this record. The title track opens up the album, a classic Prog move to a calm entrance of hand drumming and synthscapes followed by a melodic guitar riff that pulls you in as the bass leads you to your comfort zone. A rather mellow song to begin with which I found a pleasure to discover as well. Then by the 1:50 mark the heavier side of the band punches in to add some spice to the mix and then pulls back so the guitar can sing a sweet refrain and carry the song forth. Pulling off a ballad for the opening track is gutsy I’ll say that and keeps with the Prog recipe, you never know what you’re going to get! Parts of the drum rolls and synth sounds and riffs are very reminiscent of King Crimson’s “In the Wake of Poseidon” from 1970 around the 5-6minute mark. Keeping with the style in the Prog kitchen quite well we jump in to a faster paced rocker that clocks in at just over 13 minutes. Why wait for the longest till the last right? “Dreams” comes to us in three movements simply titled Parts 1, 2 & 3. The tempo/timbre start/stops changes all fall in to place with tight precision and the vocals are calling upon great lands afar and searching for perhaps a lost chord (Sorry Moody Blues for that, but hey you gotta name check!). It incorporates, rock, Prog, funk, even a little disco beat around the 6:30minute mark for kicks making it a very well rounded song. The taut guitar riffs and fast drumming throughout marks it as what would be epic live as it is on record. No one instrument over-powers another and they all share the lead in ways even if it is subtle in spots like for the bass and synths. The ending of the song has that classic let’s stretch this out for a few minutes to make it longer feel to it which is perfectly fine so long as a band doesn’t do it on too many songs or if they do not always the same way twice.

“Downtown Skyline” has a bit of a Middle Eastern feel to the drumming in the beginning allowing the other instruments to fall in to place accordingly. This song shuffles along for a couple of minutes then plummets in to a heaviness of guitar and synth riffs to break the song from growing stale. It staggers between timbres and maintains a consistent feel throughout until around the four and half minute mark when it begins to execute the standard build up but fails to pull off any kind of eruption but keeps an even keel to the song’s sway but returns to the starts Eastern texture that leads right in to the next song, “Lights“.  The shortest song on the album at just over 2 minutes is a quiet piano piece that is more of an intermission track than anything but a really nice quiet moment to gather yourself back up.

“Don’t Go Away in Silence” is a half Prog rocker, half ballad track that has some great sweeping guitar riffs in it giving it an edge of sharpness to go along with the massive drumming in this tune. It goes fast and slow to keep your attention wrapped in it from start to finish. A classic theme in Prog music, telling the tales of human nature and existence of emotions and thought. Definitely a highlighted tune on the album that does stand out above the others regardless of the grand musicianship that has been already displayed since the first notes have been played. “Heaven Can Wait“, the first song I ever heard by the band that caught my attention and made me go on the hunt for their albums has a staunch guitar tone in it that is distorted but still clear. Isn’t compression a great thing? (All you guitarists will get that one!  lol) All the right ingredients are in this mix, start/stops, tempo/timbre changes, saturated synths, mids brought up on the vocals to make it more prominent. What comes across like a ship on  high waves at sea as the synths roll back and forth then all is calm as acoustic guitar play out the swirl of words that harmonize for the chorus then drop back in to a swing style of a timbre/tempo change as the synths call upon their 70’s spirits to take hold with a solo that has time travelled from 1975 to play out then give way to the guitar solo that pinches off the notes with accuracy and strife. Post solo we settle down to the middle of the song for a brief piano interlude, drum-less and serene, then punching back in the opening guitar riff immediately followed by the rest of the band to start over that massive sound of deja vu from the song’s inception. The harmonies really stand out on this track and have a softness to them that contrasts the song very eloquently. The song refrains till the end and finishes off with a punch ending it straight out. Probably the Proggiest song on the record aside from “Dreams” and even then I think that this song beats it out for being more in tune with Prog elements than the other ones.

“Forgiven and Forgotten” the last track on the record aside from the bonus tracks commences with a good drum shuffle and a whirling synth riff  and the song comes out reminiscent of the 80’s incarnation of King Crimson circa 1982’s “Beat” Lp. Satellite was invited to the “Baja Prog Festival” in Mexico in 2007 giving them the opportunity to debut songs from this album and this song wouldn’t have been a good closing song but perhaps a mid-way track that could continue the machine to keep rolling. That 70’s funk feel in the vocals and guitar are present again allowing diversity throughout the track. Not the strongest song on the record and perhaps should have been best placed in the middle to make way for one of the other songs to complete the album. It shuffles along and drops to a stagger at the end. A great album but could have been better arranged. usually that is a non-issue with me but for this record it should have ended on a punch for me. The limited edition CD version comes with two bonus tracks, “Time Stands Still” and “Around the World“.  Sounding like a rejected song from the final selections, “Around the World” doesn’t hold water to the rest of the album and strains to be Prog but at 3:41minutes it’s more of a standard rock song heard on FM radio.

That said it does have some signal flare to it, a bit of that eastern style to it with a slinky shuffle beat to it, almost a bossanova beat but at half speed at times. A short ballad-like song that doesn’t tantalize your taste buds but makes for a good slow dance song at a wedding. Sorry Satellite but this one didn’t cut it and you were wise to leave it out of the final track listing. “Time Stands Still“, the first thoughts that come to mind is the 1987 Rush song from “Hold your Fire” Lp but this one is definitely not a cover song. Another softer offering but a bit more on the Prog side in the ballad sense again. The tempo/timbre changes make it a worthy track for the album but again like Around the World, this was again best left out of the final choices for the original record. It does pick up just past the middle section for a brief moment then falls back in to place.  Usually bonus tracks are little delicacies that were after thoughts or outtakes of songs from some session close to or during the recording of the record. Also often bonus tracks are sometimes live from the previous tour but these two songs come across as just songs rejected from the final selection.

Overall, Satellite is a good band to listen to for your entry to some mid range hard rock Prog material. They’re not too heavy nor are they marshmallow light. Middle of the road goodness. They still have a ways to go to get in to Halls of Prog as they tend still to dip in to lighter fare musically that isn’t exactly Prog but being invited to Prog Festivals is a great start for them to really get their feet wet and stretch their legs out in the genre. In time they will certainly become who they want to be and where they want to land and end up.