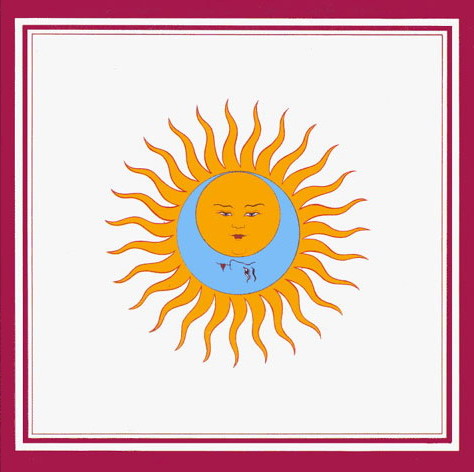 Unlike most people who’s first King Crimson record was their first, An Observation by King Crimson, In The Court of the Crimson King (1969), My auditory senses were slaughtered by their 1973 Lp, Larks Tongues in Aspic. At 16 years old I was hungry for anything Progressive Rock so having just gone through my overdose of Pink Floyd records I had recently acquired at my local flea market I asked the vendor, “What else do you have that’s Prog?” I told him no Yes or Genesis because my older sister’s friends had tried almost relentlessly to cram those bands down my throat and unfortunately, perhaps my loss, I don’t know but I never liked them even to this day. I can respect them for their contributions to the genre but just can’t dig on them. Ach well, moving on. So I was handed several albums to peruse and make my choices from. Needless to say, I bought everything I was handed without question or even looking to see what I was holding, just that it was about ten records that cost me around $40, done and done. So went back home and raced downstairs to my record player and sifted through my cache of vinyl treasures hoping that they all blew my mind. From what I can remember it was; a couple of Alan Parsons Project Lps (Sweet!), couple of Rush records (Awesome!), a record from a band called Egg (Great discovery!) and a few records by this band called King Crimson. I landed my hands on; In The Wake of Poseidon(1970), Earthbound(1972) and Larks Tongues in Aspic(1973) all of which I have never heard before so I closed my eyes and let my hand drop on to whichever one it hit first and that was the record that would grace my player.  LTIA it was and the cover art was intriguing so I didn’t bother to re-do my selection, went with it and on to the record player it goes. 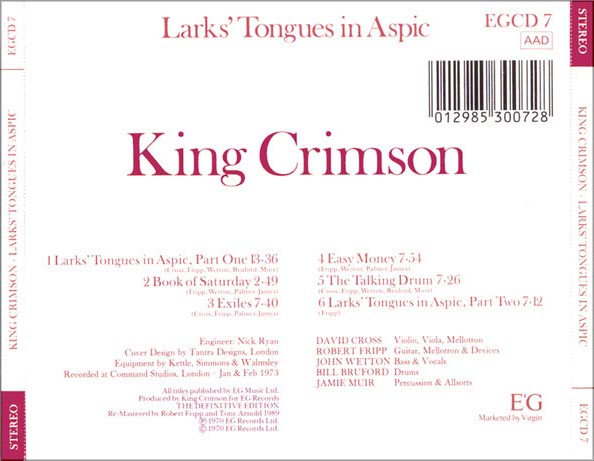 Only six songs eh? Hmmmmmm, my brain began to wonder if I had made the right choice here. I was used to albums having double this many songs from listening to all of my Doors records but hey, you never know eh? The guy at the flea market did say they were awesome and “Total Prog” as he put it, “Dark and heavy shit” I remember those words clearly to this day. Okay well let’s see if he’s right, eased the needle down and the slight crackle of an old album breathed new life through my speakers. The first song I began to hear the tingling and jingling of bells faintly in the distant then coming through to the foreground the wisping sound of a violin as the bells grew louder and the song began to gain steam. Then this gnarled fuzz of an electric guitar snarled out in single notes at me, the hair on the back of my neck and arms stood up and goosebumps covered me. This was intense. The song continued along the same pathway with this momentum building up then finally the main riff kicked in I stopped what I was doing and stared at my record player mouth gaping wide, WHAT IS THIS I AM HEARING?!?!?!?!?!?!  Those chords were the heaviest thing I have ever heard and it was just absolutely raw power being played here. Everything I was hearing was; intense, surreal, energized, powerful, dominant, compelling, brutal and fierce. This juggernaut of sound that is just shredding my mind at this point and then… the intense flow of those singled out notes by the guitarist that I couldn’t take it anymore and lifted the needle off the album and started all over. That same feeling overwhelmed me yet again and again and AGAIN. I must’ve played the beginning to the first song at least half a dozen times and being blown away by this newly discovered music I have in my possession.

This was unlike anything I have ever heard before. You never heard this on the radio, neither of my sisters had this stuff, one was in  to Hall and Oates and Journey and the other Judas Priest and Black Sabbath so something like this was entirely new to me! No standardized chords here, no verse-chorus-verse cookie cutter song structure, no lyrics(!) their rules, this was Prog Rock and I Was Loving It! The middle section of funky bass and insane guitar work scrambled my brains in to a giant pile of gray matter mess! The violin solo after the mayhem soothed my now ravaged nerves like calming a savage beast that was my cerebellum now shorting out! 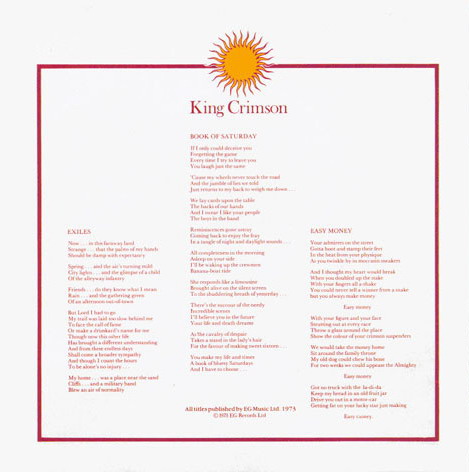 I finally managed to get through “Larks Tongues in Aspic Pt 1“, now on to the next song, “Book of Saturday“. A gentle guitar intro leads me in to this ballad soft tune that is a calmer sea to what I had just blasted through my record player about twenty times by now. My first Crimson vocal encounter is with that of John Wetton and not Greg Lake as most people relate Crim vocals to. So already Robert Fripp is one of my favourite and now influential guitarists and Wetton’s voice has a tone to it that I find appreciative and enjoyable. It’s not campy or hippie, it’s a stout English tone that I’m finding more and more the right pitch to the music here and myself. This time I didn’t stop the record and let it carry me forwards in to “Exiles“, I became an exile by this point. I exiled myself away from “pop culture” thankfully and journeyed down the road less travelled by many people at the time that I knew. I was alone and loving this. It too was a calmer song but had an air about it that left you slightly unnerved because you felt left on some distant unknown lands with no ship in sight coming to get you. I wasn’t worried about this and rather chuffed that there was no ship coming. The infusion of violin, guitar, bass, drums, percussion and mellotron keys gave me an entirely new world to explore and dive right in to. I was becomming; a Prog junkie, bitten by the bug, hooked on it, drawn in to it, addicted as it were to a genre that had no rightful place in the current scene of societal absurdity I was living in and knew that there was no one I could talk to about it. My peers were too swallowed up by the emergence of the grunge scene smelling like teen spirit and the “sellout” of Metallica’s Enter Sandman in ’91 than discovering albums that not twenty years earlier were FAR heavier than anything they had ever heard before and probably never will.

Side two dropped another bomb on me with “Easy Money” opening up with a THUD! This dirty rock mudslinger tune was sleezy and guttural fuzz guitar and tromping drums with a sliding equally sleezy bass line made this track a surefire replay. Wetton’s vocals sneak in and come to the front as he chants, “Dee da dee dow dow ba dee ee dow ba da dow dee dee dee!” Then it stops and starts to tip toe onward as he starts to sing about being rich and good looking. Showing the lifestyle of what happens when you have a lot of money and how people see you in the streets etc. An alternate second verse was more often used in live performances, perhaps a rejected studio lyric or just something Wetton came up with and it worked. This song snakes it way through and leaks off on a tangent in the middle only to come back full force to its beginnings to finish off with a sinister distorted laugh to which I can only assume is the malevolent and mysterious Crimson King himself. Segue from Easy Money I am still lured in to this album with the next track that is, “The Talking Drum“. The droning bass notes are hypnotic and the chanting drive of the song is rudely added to with Fripp’s whimsical but intricately crafted guitar lines as this song takes its time getting rolling, about three minutes in to it you start to feel the jam happen. The violin leads us not in to “pop-tation” but delivers us in to Crimson as a duel between the violin and guitar start to take shape then the wah fuzz of the bass steps in and says, “I’m Driving Here!”. I’m sent in to a whirling dervish of spins in my head as it begins to build up and take control more and more and then it screams and squelches furiously in to my ear at it reaches its ne plus ultra pay off before it snaps in to the sharp forked tongued guitar choppiness of “Larks Tongues in Aspic Pt 2” that is the sequel to the opening track and follow through with its similar blend of chords and singled out sinister notes.

The final instrumental that closes out the album and is now pelting my ears and brain with constant Prog awesomeness. Six songs, three with vocals and three without, equal balance and the whole album, amazing. The last song on the album that has the panache to close out an incredible musical journey and sufficed to say, I replayed the whole album about 5 times that day. Then around midnight I managed to get the other two Crim Lps going which also just floored me but those are stories for another time. The final smashing crescendo of the notes in LTIA2 bring the album to a climatic ending to a dissonant fade out and I’m left holding the proverbial bag but this time it’s filled with one of THE most intense and amazing albums I have ever heard in my life. Still to this day it’s one of my Top Ten Deserted Island Albums and it’s a MUST HAVE to your Prog Rock collection. If you haven’t heard it as yet, do it! Go to YouTube and check it out, iTunes or wherever you can get it and just inhale it over and over again. So to the man with the white beard who’s ‘court’ I graced for Prog vinyl and for steering me in the right direction, I thank you kind Sir.

The following Sunday I was back at the Flea Market for more Crimson albums.