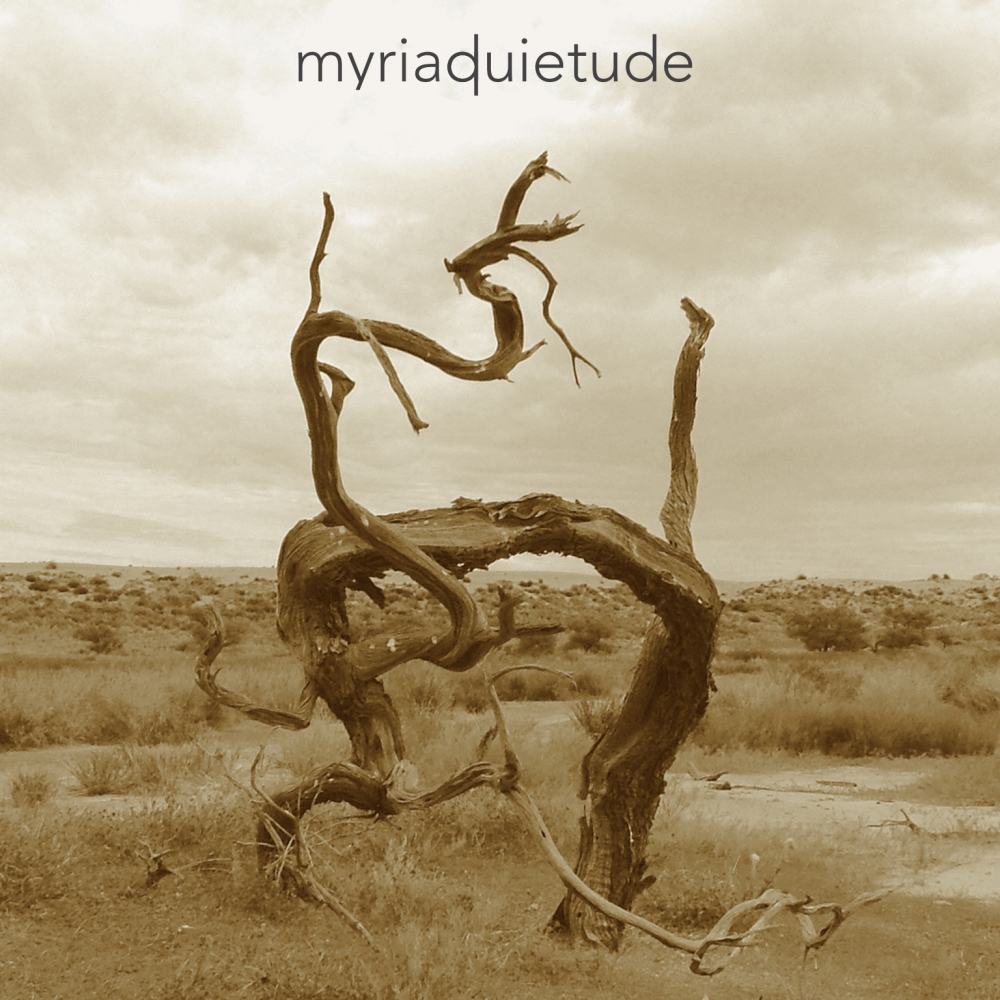 This 2013 release came in to my lap today and I found a four song album/Ep of Australian Prog Rock, a first for me. Most Prog bands I have encountered outside of Europe, the UK and North America have been either South American (Bauer) or South African (Albinobeach) so this was an absolute treat to hear something from the land down under besides Midnight Oil, Men at Work and of course, AC/DC.

The album art is clearly, the bush! The Outback as it were and the band has spared no expense in making it their lead way in to this album. The wording I found to be very interesting tongue-in-cheek with the “Q” and “D” blending. Unfamiliar with a lot of the music scene in Australia it is difficult to mark their “PROGress” seeing that very few bands during the late 1960’s and 1970’s ventured that far to the East. Pink Floyd’s last performance there was August 15th 1971 at the St. Leger Stand, Randwick Racecourse, Sydney, New South Wales, Australia. It took the band another seventeen years before their return on their Momentary Lapse of Reason Tour in 1987. So knowing very little on the Australian Prog movement we’re going in blind here which I felt was actually a benefit to listening to this album.

The four songs we’re listening to here are;

The first song we are opened up to a classic didgeridoo in the background then jumping very tribal-esque drum pattern and bass romp. The song never quite takes off but maintains a consistency throughout. It’s a good opener provided that the follow up song carries it on and upwards. The keyboard’s short solo is graced along with a series of what sounds like a few different regional horns that play slightly in the backdrop as accentuating facet rather than a main instrument. A guitar like instrument (hard to tell what kind it is) also makes a cameo giving it a twist of flavour. The synth sound definitely takes lead role here on top but the drumming is definitely the champ here with its whirling and warbling sounds of more than one percussionist involved in the melee of thumping overtures they play out. Drums win here but marginally because a solo drum track wouldn’t have carried it as well by itself. The “myriad” of other instruments that fall in to place keep this track well babysat with a steadiness that you expect to take off in to a full on Prog epic but sadly comes short after four and a half minutes. Perhaps live performances of this song will prevail it as a thunderous set list opener.

A slow keyboard intro brings us welcomed to the procession that quickly becomes a reminiscent of early to mid eighties Tangerine Dream songs that weren’t an hour long. Punchy and loud eventually the song commands an audience.  The echoing keyboard riff sails over the drumming that’s concise and tight and pays homage to a heavier seventies drum style then dropping back to a jazz like rim shot clicking with the hi-hats in tow. The bass lines here are great with a direct approach of slap back reverb delay by probably putting the mic right in the back of the cabinet or combo instead of the old plug the bass in to the board trick. I hate that trick but it does work well. We get a sample of vocals at the end that are more like a cry out to the stars than an actual singing track but it seems to add a real dynamic to the song and doesn’t take away from it at all.

Another Tangerine Dream like intro here as this one slowly crawls through the mud after the torrential rainfall and then gets electrified with a strained guitar track that stands out as it chooses its notes carefully. Although it segues away from the Tangerine Dream sound it tangents back in to it now and then like a wave flushing up to the shore. It surely contains the element fundamentals of Progressive Rock here and carries forth the instrumental qualities where Prog rules state you don’t always need a lot of notes to make it Prog. This one curves around the other songs before it better as it finds it’s niche in being the second last song in hopes to be played again first or make it to a “mixed tape” somewhere.

The longest song on the album clocking in just over 17 minutes starts off with yet another Tangerine Dream like sequence intro like that of their mid-late seventies performances and then loops in to a synth dream like state as we are led through the streets of its procession. Calm and revered it takes its shape with confidence. The guitar walks in as a main player here and adds an over tone of compressed electrified sound but with a sustain to the voice of it that carries it nicely throughout. The bass is languid and has a drawl to its flare here, punchy and gnarled like an old oak tree. The drums are tight, perhaps too tight on the snare here as they sound a bit over compressed and left for dead at the mixing console’s mercy here. They seem to be a last minute add in as opposed to the clockwork like patches they have played out in previous tracks.

The tone of the drums changes around the 7.5minute mark to a more Zeppelin-esque refrain and the guitar comes back with a fuzz like that of about as heavy as Bad Company ever got. The guitar work here though is superb with a dedition of less is more tone. Slight fuzz and reverb makes it stand out and take control of the flow. Only to be halted by a grand polyphony of keyboard notes briefly then a fade down slightly to what becomes sways of guitar notes pulled form different ports in space. Around eleven minutes in we are again graced by vocals that are very much an eighties feel to them with the looping keyboard Tangerine Dream four note collation that hypnotized us in 1976. The vocals don’t last very long though which is a shame as they would definitely bolster the song here as with the previous song only a snippet of “singing” is exhibited here. Perhaps on other recordings they do we will have a more prominent vocal. That is not to say that they have to have more vocals, perhaps this is their M.O. for their sound. Shortly after the song collapses in to a final three minute cacophony of sound with the drums sounding more like beaten garbage cans in the distance and the guitar just ambling about with the keyboards swirling a pasted on top frosting.

The finale of the song reminded me of the Beatles song, I Want You with its crescendo build up of repetition till it comes to a complete stop in to nothingness. Clever trick to close out the album leaving you hopefully wanting more of their sound and to replay the album. It worked, cheers. But being only an Ep of four songs it wasn’t enough to wet my palette to rush out and find their other albums right away. But also, not to discard their music either, they have some great passages here just never explored enough on a grander scale where I feel they would have zoned in on their sound much better. Perhaps they were being modest here but when you are going to release an album, go for the gusto and give it your all, always!

Before looking the band up for its bio and other albums I gave this a compete listen. Later having found more about them from the wonderful site and one of my favourites, http://www.progarchives.com, I discovered they are from Brisbane, Australia and have three albums stemming from 1996. Sadly the link to their official website is a 404 Error cannot be found and was a dead end street. Disappointing unless they are in the process of working on a new website for the near future. A two man operation of Matt Heindorff (guitars, synths, vocals) and Steve Clarke (drums) which conjures up the post Kraftwerk/Neu split and the new adventures of Ralf and Florian who released an album of the same name in 1973 as they leaned on each other musically and technically to discover their sound that became the newly envisioned Kraftwerk band of 1974 with the album, Autobahn.

This band, Myriad, has been described similar to The Cancer Conspiracy to which I agree to a point but find that TCC is more heavily in to their keyboards than Myriad. Also, I have heard from reading about that Myriad is more considered to be Post Rock than Prog Rock. Here’s my take on that. Post Rock to me is really just Prog Rock but with a lot less vocals in it. It’s what Prog Rock became in some areas, a facet of what Prog Rock is, and some bands are more prone to their progressive roots than others. But really Post Rock which really sounds like amazing movie soundtrack music sometimes can be synced up to many films as a better soundtrack than what really made the film.

For Myriad’s case though, I enjoyed what I heard and with a little more time and hard work and possibly the addition of a couple more members the band has great potential as being a sounding board for other Australian bands to venture down the pathways of their forefathers in Prog. Not having heard their previous albums I cannot comment as yet to whether they have done their due diligence in the world and fields of Prog. Perhaps that’s my fault but when you don’t get everything handed to you, you have to go on journeys and discover these bands like Indiana Jones sometimes.

They have the potential to set the bar for other Prog bands coming out from the land down under but they too themselves have some pretty big shoes to fill on their next album if that is to become a reality for them and if they haven’t already closed up shop and moved on to other things.